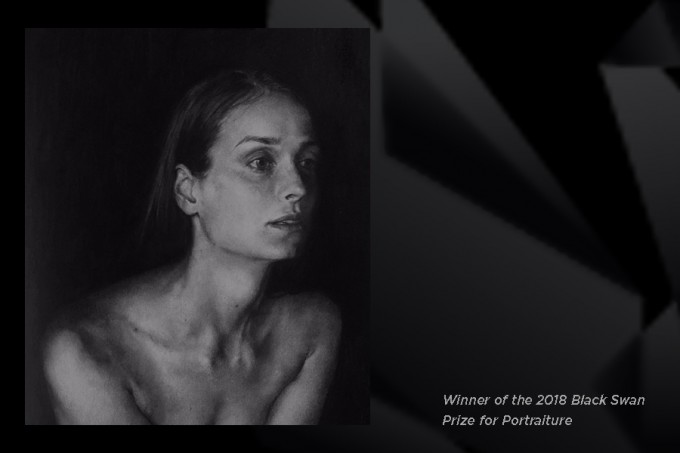 Now in its 12th year, the prize attracted 500 artists from throughout Australia, and the forty finalists’ works are currently in display in the Centenary Galleries at the Art Gallery of Western Australia (AGWA). The winners were announced tonight at AGWA, with the NSW artist taking home $50,000 donated by the Lester Group, plus two return tickets to any Singapore Airlines destination to the value of $3,500.

The 2018 judges were Joanna Gilmore (Curator, National Portrait Gallery, Canberra), Mathew Lynn (Artist and fifteen times Archibald Finalist), and Dr Stefano Carboni (Director of AGWA). They said about Antoinette’s work that it is simultaneously powerful and gentle, and demonstrates a palpable connection between artist and sitter, sitter and artist. ‘On close looking, we were struck by the artist’s consummate handling of the medium, and the skill with which she has pushed the possibilities of charcoal without losing its qualities and its capacity for nuance of texture and tone’.

Antoinette said ‘Alexandra and I both come from the Greek island of Castellorizo, and we discovered we were fourth cousins twice removed. In the past few years I have taken solace in my female contemporaries and she is one of them. My artistic approach is personal, connected, and sustained—elements that I find complement our friendship’.

The Black Swan Prize for Portraiture is bought to WA by ARTtrinsic Inc, a not for profit organization chaired by John Langoulant. In announcing the winners tonight John said “each year the artworks submitted are outstanding and the number of entries keep growing. The Centenary Galleries within AGWA is a perfect location to showcase the finalists works, and we urge the general public to visit, as well as vote for the Baldock Family People’s Choice Award which closes on the last day of the exhibition on 26 November 2018.”

“Our long term sponsors, suppliers and volunteer team have been invaluable in their support to bring this exhibition to the WA public, as is the work of the Board, Operations Management and staff to make this event happen.”

Also part of the Black Swan Prize for Portraiture Exhibition Season is the Youth competition, featuring thirty youth finalists aged 12 – 17, which is on public display along with the Salon des Refusés works until 23 November 2018 in Towers 1 and 2 of Brookfield Place, 125 St Georges Terrace, Perth. Winners of the Youth prizes will be announced on 7 November 2018.

Original artworks will be on display at Brookfield Place, whilst a printed outdoor exhibition of community, hospital and youth artworks will be showcased at the Perth Cultural Centre in from 27 October – 26 November 2019.

**An exhibition of artworks that were not shortlisted for the Main Award allowing the public to experience the full variety of works submitted.